e poor. Yet this is only on the surface. In fact, the earlier ballads told of him doing no such thing. It was only at the beginning of the 19th Century that he has become known for this, his skill at archery- his ability to shoot arrows from a great distance to land its target and being good with the sword. Though originally he is shown as a Yeoman, (a commoner who cultivates the land) later on Robin is portrayed to have lands and position as Earl of Huntingdon, which have been snatched from him by the eager and cunning hands of the Sheriff. In the versions that followed, it is said that Robin went on the crusades to fight in the Holy War for King Richard the Lionheart. His acts of courage and battle hardy skills are all contributing factors to appoint him the leader of the outlaws.

So what do we know about Robin Hood? At first glance he is considered loyal and brave;a good leader. He would lay down his life for his men, and they for him. He does not harm women or children and always comes to the rescue at his own peril, to save those about to be executed; or hung or amputated.

No honour among thieves? Seems there is- he punishes the corrupt and is saviour of the oppressed.

In this way, Robin typically signifies a ‘concept’, a martyr of the people, those who are too weak to look after themselves and are taken advantage of by those in power and authority. The stories tell of his adventures as he one by one recruits his men, from Little John, to Allen a Dale, Will Scarlet, Friar Tuck and Much to name but a few, not forgetting his childhood sweetheart and heroine Maid Marian. In the retelling, their adventures often involve a fight in each chapter and the scrapes they get into, but Robin Hood and his merry men clad in Lincoln Green always triumph over injustice and the evil Sheriff of Nottingham.

The character of Marian is depicted a spirited and outspoken lady who, not only is good at fighting herself, but often disguises herself as a man in order to avoid detection in and out of the castle. She is seen helping those in need and acts as spy for Robin and his gang in Sherwood Forest whenever there is need.

It is interesting to see the changes made in the adaptations of the original ballad, from modern day TV series to films that tell of Robin Hood and his merry men. There have been countless adaptations which have featured the happy outlaw and cater for a modern audience. 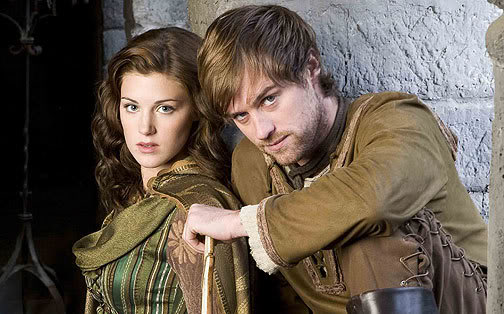 For Saturday night viewers, those who remember the ‘Robin Hood’ series starring Jonas Armstrong (before ‘Strictly Come Dancing’ & the results show)- it is a family show that caters for a younger audience. Robin is in his mid 20’s, with the attractive Marian who, along with the presence of Richard Armitage as the sneering leather clad Guy of Gisbourne, was one of the main reasons I watched the show. When she left, the show introduced a variety of meaningless characters with a plot bordering on the ridiculous. They were there for the sake of being evil, but nothing could bring Marian back, and shattered all hopes of Robin and Marian being together like they should be. The show only lasted three seasons before it ended.

To act as a further comparison, later films (including Ridley Scott’s adaptation of the popular legend and ‘Prince of Thieves‘) reveal a mature Marian and Robin, supporting a different take on the ballad. A more accurate portrayal, in my opinion, of the stark and brutal reality during Robin Hood’s lifetime.

There is no denying there has always been comedy in Robin Hood. From the fierce yet frustrated sheriff who is always duped by Robin, to the adventures of the merry men whose presence it can be argued; is to provide comedic relief; there is something to make it light hearted and enjoyable for all audiences.

The fluctuation of character portrayals can be quite amazing. Let’s take Guy of Gisbourne for example.

In Howard Pyle’s “The Merry Adventures of Robin Hood”, he appears as a stranger in the forest who is killed within a chapter by Robin in a duel. In the 1956 version by Roger Lancelyn Green, he is the right hand man of the Sheriff of Nottingham, who tries to woe Marian and pursues her any chance he can get. In the 1991 Kevin Costner version (of which the sheriff is played by Alan Rickman and Richard the Lionheart by Sean Connery) Guy of Gisbourne is portrayed as the Sheriff’s cousin, whom he subsequently stabs to death when he fails to succeed in the capture of Robin.

Now we come to the the most recent film directed by Ridley Scott. Guy of Gisbourne does not even appear in this, and the Sheriff is portrayed as a snivelling and power hungry lacky of Prince John who hardly makes an appearance more than three times in the entire film. Perhaps this is due to the vast number of villains, with Prince John holding a prominent role, along with the new character of Godfrey.

Ultimately, whether Robin Hood existed or not matters little. The ‘idea’ of him has transcended time- a hero to represent and defend the people against corrupt lords and the law of the land, inspiring others with his spirit, to address the balance between the rich and the poor; issues which are important to this day.